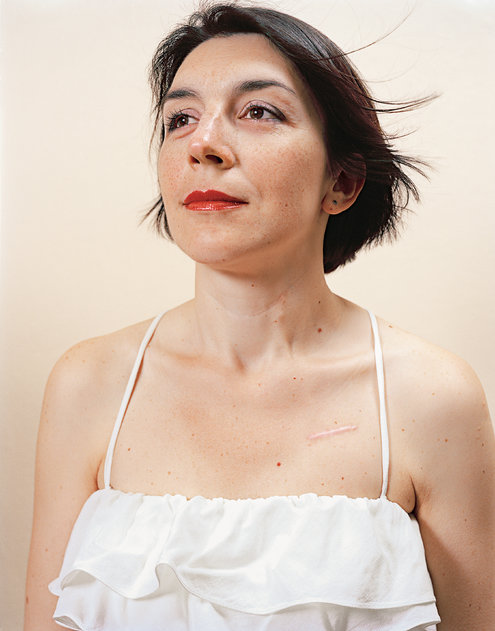 Mirela Mustacevic, who suffers from rheumatoid arthritis, had a nerve stimulator implanted as part of a medical trial. Her symptoms have lessened significantly.(Credit: Sarah Wong for The New York Times )

One morning in May 1998, Kevin Tracey converted a room in his lab at the Feinstein Institute for Medical Research in Manhasset, N.Y., into a makeshift operating theater and then prepped his patient — a rat — for surgery. A neurosurgeon, and also Feinstein Institute’s president, Tracey had spent more than a decade searching for a link between nerves and the immune system. His work led him to hypothesize that stimulating the vagus nerve with electricity would alleviate harmful inflammation. “The vagus nerve is behind the artery where you feel your pulse,” he told me recently, pressing his right index finger to his neck.

The vagus nerve and its branches conduct nerve impulses — called action potentials — to every major organ.

But communication between nerves and the immune system was considered impossible, according to the scientific consensus in 1998. Textbooks from the era taught, he said, “that the immune system was just cells floating around. Nerves don’t float anywhere. Nerves are fixed in tissues.” It would have been “inconceivable,” he added, to propose that nerves were directly interacting with immune cells.

There was nothing in the scientific thinking that said electricity would do anything. It was anathema to logic. Nobody thought it would work.

Nonetheless, Tracey was certain that an interface existed, and that his rat would prove it. After anesthetizing the animal, Tracey cut an incision in its neck, using a surgical microscope to find his way around his patient’s anatomy. With a hand-held nerve stimulator, he delivered several one-second electrical pulses to the rat’s exposed vagus nerve. He stitched the cut closed and gave the rat a bacterial toxin known to promote the production of tumor necrosis factor, or T.N.F., a protein that triggers inflammation in animals, including humans.

“We let it sleep for an hour, then took blood tests,” he said. The bacterial toxin should have triggered rampant inflammation, but instead the production of tumor necrosis factor was blocked by 75 percent. “For me, it was a life-changing moment,” Tracey said. What he had demonstrated was that the nervous system was like a computer terminal through which you could deliver commands to stop a problem, like acute inflammation, before it starts, or repair a body after it gets sick. “All the information is coming and going as electrical signals,” Tracey said. For months, he’d been arguing with his staff, whose members considered this rat project of his harebrained. “Half of them were in the hallway betting against me,” Tracey said.

Inflammatory afflictions like rheumatoid arthritis and Crohn’s disease are currently treated with drugs — painkillers, steroids and what are known as biologics, or genetically engineered proteins. But such medicines, Tracey pointed out, are often expensive, hard to administer, variable in their efficacy and sometimes accompanied by lethal side effects. His work seemed to indicate that electricity delivered to the vagus nerve in just the right intensity and at precise intervals could reproduce a drug’s therapeutic — in this case, anti-inflammatory — reaction. His subsequent research would also show that it could do so more effectively and with minimal health risks.

Tracey’s efforts have helped establish what is now the growing field of bioelectronics. He has grand hopes for it. “I think this is the industry that will replace the drug industry,” he told me. Today researchers are creating implants that can communicate directly with the nervous system in order to try to fight everything from cancer to the common cold. “Our idea would be manipulating neural input to delay the progression of cancer,” says Paul Frenette, a stem-cell researcher at the Albert Einstein College of Medicine in the Bronx who discovered a link between the nervous system and prostate tumors.

“The list of T.N.F. diseases is long,” Tracey said. “So when we created SetPoint” — the start-up he founded in 2007 with a physician and researcher at Massachusetts General Hospital in Boston — “we had to figure out what we were going to treat.” They wanted to start with an illness that could be mitigated by blocking tumor necrosis factor and for which new therapies were desperately needed. Rheumatoid arthritis satisfied both criteria. It afflicts about 1 percent of the global population, causing chronic inflammation that erodes joints and eventually makes movement excruciating. And there is no cure for it.

To read the rest of the story click the link below:

We are located in downtown Easley beside SunTrust Bank, across from the First Baptist Church offices (directions)